The dominican movie directed by Frank Perozo and starred by popular reggaeton and latin trap singer Ozuna will arrive finally to american theaters on January.

Emotion and excitement preceed this movie, because of its big success on Dominican Republic and Puerto Rico. Its fame has extended from mouth to mouth and a lot of people inside the US are eager to watch this film. The familiar comedy will arrive to more than 15 north american states, being several of them Boston, New York, New Jersey, California and Las Vegas.

The initial premiere date will be on January 25th, but if you want to know exactly when will premiere in your nearest city, here we present you a calendar with all premiere dates: 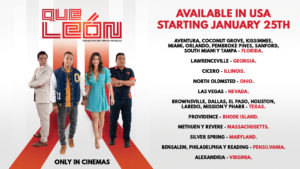 We will see you at the premiere!